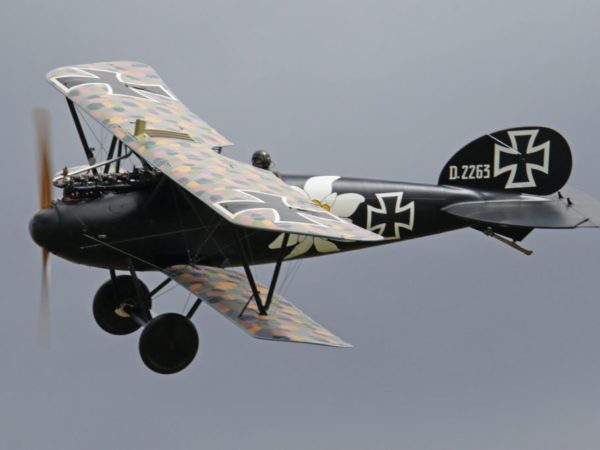 On a beautiful day last Sunday (6th Sep 20), with still winds and an occasionally threatening sky, the WW1 Aviation Heritage Trust’s black Albatros Dva in the colours of Bavarian Otto Kissinberth finally got to display in front of an appreciative crowd at Stow Maries Wing and Wheels air show. Rubbing shoulders and displaying with WW1 AHT’s Nieuport 17, the two aircraft provided the sight and sound of combat over Northern France as the scene setter for an air pageant that included a Fox Moth, the Tiger 9, and Stampe, formation teams as well as a red Mew Gull.

The Albatros arrived in England from the TVAL stable in NZ. It was re-assembled at Old Warden and spent most of 2019 being modified to meet the exacting LAA requirements for a Permit to Fly on the UK register. It arrived at Stow Maries at the end of last season. With the pandemic it is only now that we have been able to demonstrate why it was built in such large numbers for the German Air Service with its good rate of climb from its 180hp Mercedes Benz engine and its dual belt machine guns firing forward through the propeller

Photos with thanks from Terry Dann